From Scott DeVeaux, The Birth of BeBop:

Howard McGhee told the army psychiatrist, “Man, why should I fight? I ain’t mad at nobody out there. . . . I wouldn’t know the difference. . . . If he’s white, I’m going to shoot him. Whether he’s a Frenchman, a German, or whatever, how the fuck would I know the difference?” McGhee was informed, “We can’t use you.” Later, he reflected: “I wasn’t ready to dodge no bullets for nobody. And I like America. But I didn’t like it that much. I mean, it’s all right to be a second-class citizen, but shit, to be shot at, that’s another damn story.” 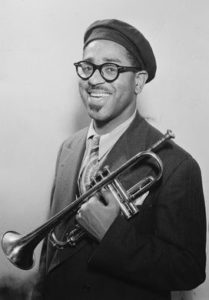 Dizzy Gillespie (who drew the attention of the psychiatrist by carrying his trumpet in a paper bag) had a similar reaction:

They started asking me my views about fighting. “Well, look, at this time, in this stage of my life here in the United States, whose foot has been in my ass? The white man’s foot has been in my ass hole buried up to his knee . . . ! Now, you’re speaking of the enemy. You’re telling me the German is the enemy. At this point, I can never even remember having met a German. So if you put me out there with a gun in my hand and tell me to shoot at the enemy, I’m liable to create a case of ‘mistaken identity. . . .’”

They finally classified me 4F because I was crazy enough not to want to fight, in anybody’s army.