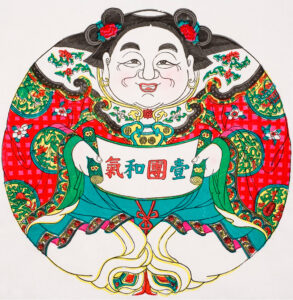 These four characters might be translated as “one circle of harmonious spirit,” but are commonly translated as “Roly-poly Ball of Harmony.” They appear on the scroll held by the “roly-poly boy” in a popular version of a painting by the Chenghua Emperor, Zhu Jianshen (1447-1487), of the late Ming Dynasty, who wanted the imperial family to unite as one. See image at left.

The following text appears on the back of a postcard reproduction that I purchased in Suzhou:

“The print, also entitled “Harmony Results in Good Fortune”, is an influential and widely spread traditional masterpiece among block prints at Taohuawu. It features, the round face of a lovely and charmingly naive boy dressed in embroidered silk, with hair tied in a pair of top knots decorated with red flowers and a silver padlock engraved with “Eternal as the sun and moon” as well as a scroll bearing the phrase “Roly-poly Ball of Harmony” in his hands. A delightful sight, the circular composition of the image symbolizes that the family will live together harmoniously, happily, and satisfactorily on the occasion of the Spring Festival and in the new year.” 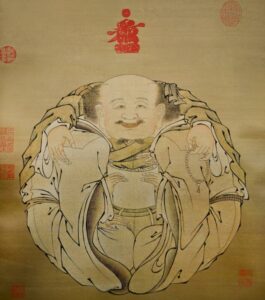 The original version of the image was a bit different. According to Wikipedia, it depicts “Tao Yuanming, Lu Xiujing, and Zen Master Hui Yuan [representing Taoism, Confucianism, and Buddhism] embracing each other, with the three, together, looking like Maitreya,” an image of the Buddha.

According to the story I heard, the emperor was having a lot of trouble with infighting among his large extended family and made the painting as a plea for harmony and unity. Let us hope.