My cousin Yvonne was three years older than I. The summer she turned 18 she and (I think) her younger brother Matthew spent a few weeks with us in Coronado. She was slim, blonde, beautiful, and boy-crazy, and of course I was in love with her in that entirely theoretical but still heart-throbbing way that a 15-year-old boy can be in love. Here is the only photo I have from that summer, the two of us back-to-back, the neighbor boy (Jamie?) in the middle, and Matthew—I think—at the far left. 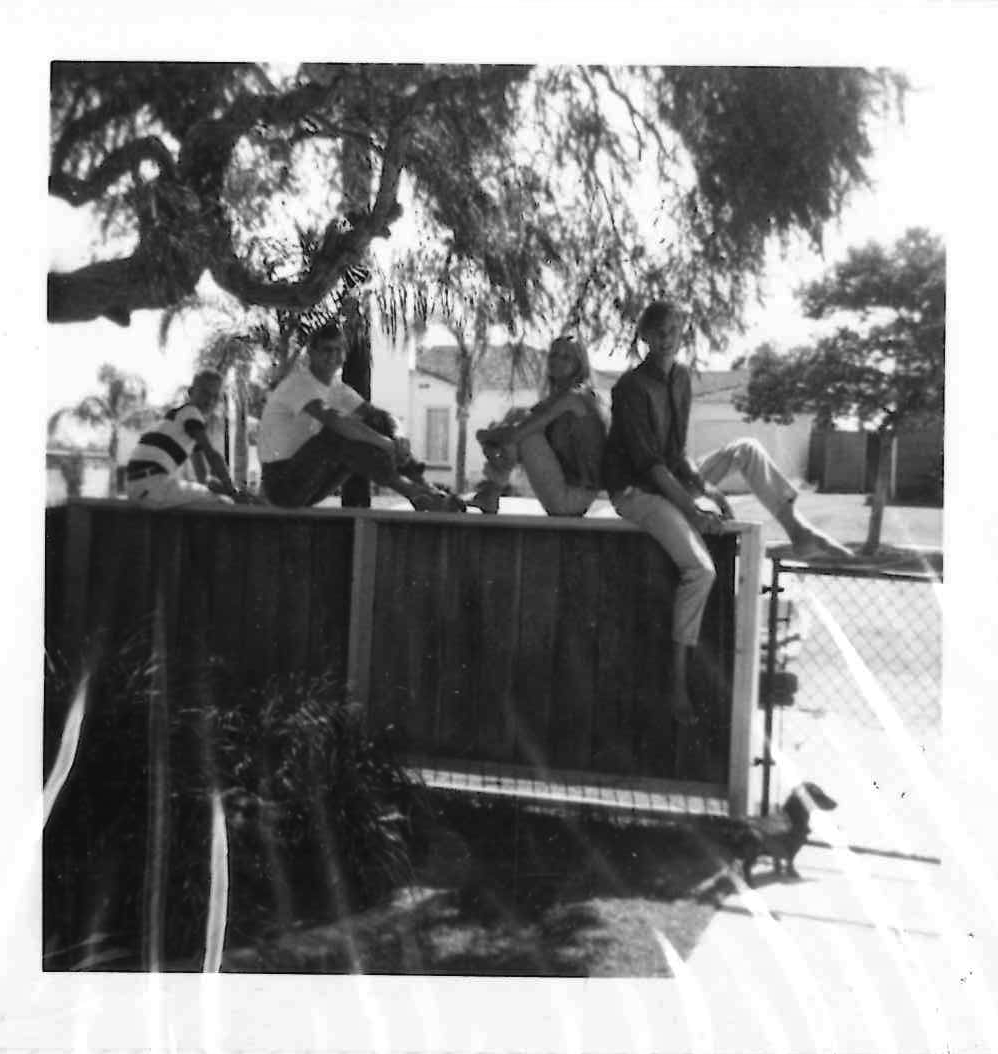 Yvonne was the eldest child of David and Marilyn Bogy, who were Catholic in the old-fashioned way and had a very large family. Eight kids? Twelve? I can’t remember. David Bogy was my mother’s first cousin, although since David had been adopted there was no “blood relation”—a fact that helped to nurture my teenage infatuation.

Years before, when I was perhaps six or seven, we were at some sort of family gathering at the house of David’s parents, Vernon and Margaret “Daisy” Bogy. The evening was coming to an end, and everyone was standing inside the front door, trying to say goodbye but failing. It was always at moments like this that my mother quoted Mr. Timmis, a man she had known in her youth. “Come as often as you like. Stay as long as you wish. But when you get up to go, for godsakes, go!”

At that time we were living in the San Fernando Valley and we had Siamese cats. Alex, five years older than I, had demanded a baby brother early on, and my mother had responded by promising him a cat. In the event she couldn’t bear the idea of the cat being lonely, so she got two cats, and soon she had many more, as she was too tenderhearted—at first—to consider birth control. I remember being told that the year I was born, thirty-six kittens were born in our backyard.

By the time of this family gathering at the Bogy house on Laurel Canyon Drive, however, my mother had become a believer in birth control—for cats, at least—and so I knew all about it. Standing in the doorway, listening with increasing impatience to the pointless chit-chat, I heard the conversation turn to David and Marilyn’s ever-growing family. Here was something I knew about, I thought. “David,” I said, “if you don’t want to have any more children you should have Marilyn spayed.”

That summer of 1967, my mother was alarmed at the responsibility of supervising a boy-crazy 18-year-old girl during her beach holiday. There was a bit of furtive smooching with Jamie, and some flirting with sailors on shore leave, but in the end no harm was done. Mother was much relieved, I think, to send Yvonne home.

I lost track of Yvonne for a while. The way I heard it, she married Bill Burger to get out of her parents’ house as much as anything else. We corresponded quite a bit for a while in the early 1980s. By then her husband was very ill with a degenerative disease, something like Huntington’s chorea. He was unable to work, his parents were decidedly unhelpful, her son and daughter were in their teens, and she was left trying to hold it all together.

In 1986 I took a job teaching at Casablanca American School, in Morocco. I had never been to England, and I wanted to see Dorset, especially, because I had been teaching Thomas Hardy’s novels for several years by then. I knew that Yvonne had had a rough go of it for the last few years, so I offered to pay her airfare if she would meet me in London and share my Christmas holiday in England. To my surprise, she accepted. We stayed at a rustic B&B in Dorchester, visited someone I don’t remember, went to Oxford, and we must have seen a bit of London, too, but I don’t remember exactly what. Yvonne had turned into quite a keen gardener, and she wanted very much to visit Kew Gardens. I think she did, but on her own. I can’t remember what I did while she was there. It was great to see her again after so many years, and I was very happy to provide her with a break from all her family problems, and to give her a holiday that she never could have afforded on her own. But it was also sad to see that the carefree 17-year-old of my youth had not only aged, but had been worn down, physically and emotionally.

After a while we lost touch again. I married, continued to work overseas, had two children of my own, and had little time for anything beyond work and family. Years passed, including over a decade in China. I returned to North America in 2015, kids grown up, marriage ended long before. Last year, after I settled in British Columbia, my brother discovered several boxes of mine that he had misplaced years before. He sent me a box of papers, and among them I found a collection of letters from Yvonne.  I wondered how she was doing. I thought I should look her up, and send the letters back to her. My brother said he had her contact info, but it was on an old phone that he couldn’t find. Finally, I went online and after a few false starts I learned that she passed away five years ago, before I came back from China. She was 64 years old. In June I will be 67, and for the first time I will be three years older than Yvonne, instead of the other way round.

Yvonne, I miss you, and I’m sorry we lost touch, and I wish I could hug you just once more.